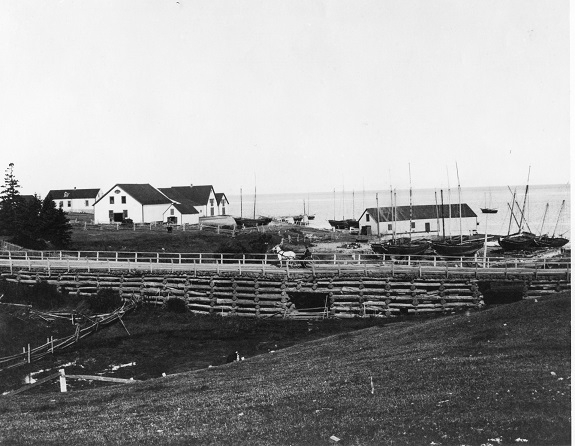 This building is designated a Local Historic Place for its association with Charles Robin and Company and for its architecture. The Robin company was active in the fishery at Caraquet from the second half of the 18th century through the mid-1900s. It bought dried cod from fishermen for export to Europe and the Caribbean. Formerly called the CRC Building, using an abbreviation of the company’s name, this structure was used to store salt, while the upstairs served as a workshop for the carpenters working for this business from the isle of Jersey. Of the 15 or more buildings occupying the company’s site, this is the only one left standing from the era of that business in Caraquet. This cedar-shingled building is also known for its architecture. Constructed in accordance with the owners’ strict specifications, its interior is reinforced with supports formed out of the trunk and roots of a tree. In 1974, it was transformed in a theatre space by the Caraquet based company, Théâtre populaire d’Acadie. The hospital and the School of Fisheries also stand on the property of this one-time fishing company from Jersey.