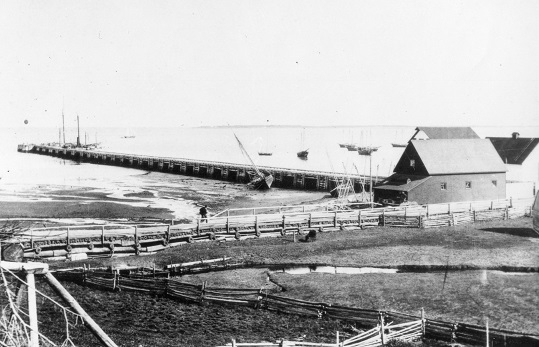 This public wharf with its T-shaped main section sits at the port of Caraquet Bay. Originally constructed by James Young & Sons circa 1860 for that company’s fishing business, it was associated with the Young family’s enterprise and long referred to as “Youngs’ Wharf.” The wharf was purchased by the provincial government in 1883 and turned into a public wharf. It was subsequently acquired by the federal government in 1919. By the mid-1900s, it was known locally as “Gorton-Pew” wharf in reference to the main fish plant located next to the wharf. At the turn of the 20th century, the municipality of Caraquet boasted five wharves along its shoreline, but the present wharf became the sole public wharf in the mid-1900s. This structure has been repaired, improved and expanded countless times throughout its existence and is the only wharf to have withstood the ravages of time and the sea. In addition to its association with the fishing industry, this wharf becomes a general hub of activity in the summer even today, particularly for the traditional blessing of the fleet.