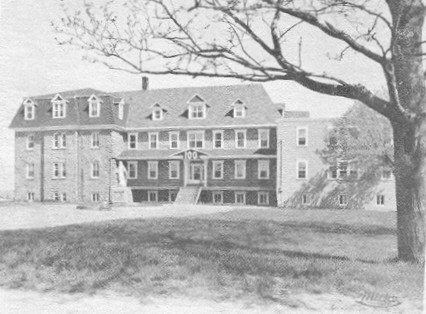 Caraquet Convent is designated a Local Historic Place for its association with the educational and religious history of Caraquet. It is recognized for its architecture and its ruins. Construction of the building began in 1870. It opened its doors for the education of young girls in 1874 under the direction of the Sisters of the Congregation of Notre-Dame. A three-storey expansion made of dressed stone and added in 1905 was the work of architect Nazaire Dugas. A second wing, made of wood and consisting of two storeys, was built on the east side in 1947. The convent stopped teaching in the 1970s, and part of the building was used for community projects. In 1982, the newspaper L’Acadie Nouvelle opened its first offices there. Fire destroyed the building in 1992. The ruins of the central part of the convent are of particular heritage value because the façade’s sawn stone is from the construction of the first stone church in Caraquet, which was built in 1817 and was located to the east of the convent. A statue of the Virgin Mary on the grounds in front of the ruins was untouched by the 1992 fire.