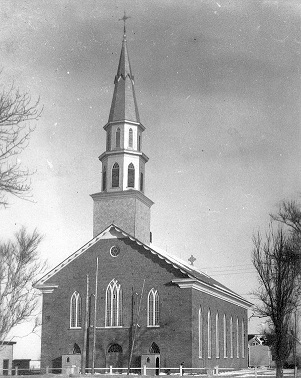 This Roman Catholic church was built in the Classical Revival style in 1857 with stones sawn by Amice Duval, a carpenter/contractor originally from the isle of Jersey. Located on the main street as the centre of an institutional complex taking in religious buildings including the presbytery, the old cemetery, the ruins of the old Congregation of Notre-Dame Convent and the location of the former Collège du Sacré-Cœur, the building dominates the surrounding area. Made of sawn sandstone from quarries in Grande-Anse, the structure measures 140 feet by 60 feet. The stone shelters at the side exterior doors were added after 1920, while the bull’s eye stained glass window on the east side, representing St. Peter, was installed in 1956. The exterior door arches and windows are in the Gothic style.