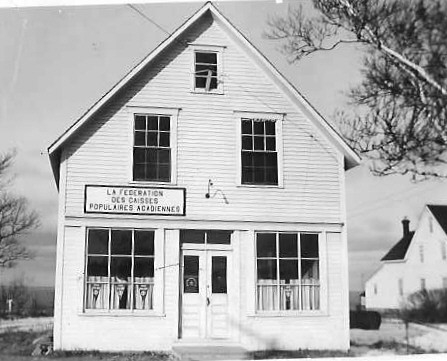 The former head office of the Fédération des caisses populaires acadiennes is recognized for its role in the financial sector and for its architecture. It was in this building that the first offices of this financial institution were opened in 1945, and it continued to serve as its home for 10 years. The Caisse populaire de Caraquet was also located here during that period. It was built by Fruing, a firm from the isle of Jersey, circa 1870 and served as a retail store for the company. The building is an example of vernacular Classic Revival commercial architecture from this period. Although a new foundation was built and renovations were carried out, the building still exhibits the traditional elements of this style, with its rectangular plan, gable roof, window entablatures, wood shingle siding with corner boards and symmetrical storefront design. It was moved from the northeastern corner of the intersection of Saint-Pierre Boulevard West and the street on which the church stood to its current site. Purchased by Marie-Louise Blanchard in 1918, the building was used as a craft workshop. It was subsequently returned to its original function as a retail store.